Alone with four cuddly cats in a 3-story house with a backyard on the edge of Potrero Hill and the Design District, I was in heaven. I was catsitting for a week and decided to take a ‘staycation’ from work to soak up every morsel of space– both physical and personal– and finally just kick back and relax.

At the time I was living in cramped teeny tiny room, tucked away under the staircase of the flat above, with a minuscule window peering out into suffocatingly small courtyard. The courtyard received little light, and its main function was as an outdoor corridor– a winding staircase perpendicular to my room was used heavily by the abutting apartment complex. At all hours of the day, people were traversing the staircase, only an arms length from my window. Consequently I had to keep my curtain closed, always, to avoid the awkward peers into my room from the frequent passerby.

Capable of only fitting a desk and a twin bed into my room, my ‘closet’ was a bar that stretched halfway across one wall, allowing me to hang clothes which, when lying on my bed, dangled inches above my nose. The close quarters with my ‘closet’ didn’t seem to bother me– I guess after doing months and months of research in both Fiji and Ethiopia, where I had to sleep under poorly hung mosquito nets each night, I blocked out the impending claustrophobia that most people commented on upon seeing my set up.

With my bed pressed flush against the left wall, the bottom half of my bed (where my feet rested) was under the staircase, which cut halfway through my room vertically, beginning about one foot off the floor and meeting the opposing corner, and jutting out halfway across my room horizontally. My ‘dresser’ was tucked away in a little cove wedged between where the staircase jutted out horizontally and the opposing wall. Every morning in a race against time, I had to leap onto my bed to retrieve my clothes, many of which would fall on my bed as a tore through the once organized piles of clothes. Consequently my room was always on the verge of a disheveled state, something that my land lady could not stand.

Cluttered and jammed underneath my bed were storage boxes mostly filled with my land lady’s belongings. A high shelf winding halfway across the perimeter of my room just a foot and a half below the ceiling was in a similar state.

Called the ‘Harry Potter Room’ amongst all of my friends, my ‘room’ was actually a storage closet converted into bedroom.

I lived with two other people in their mid twenties and early thirties as well as my 75-year old land lady, who at times had trouble with the concept of privacy and personal space. She deeply ached for us to vacuum our rooms daily and keep everything in tip-top, sparkling shape, as if no one really lived in the room. And she would check, probably daily, to see the state of our rooms. It was similar to being back in high school with a caring, motherly figure constantly on your heels to clean your room.

An unusual set up– but a good starting apartment– I had little space to operate my life. Working from home as a freelance writer and artist (imagine huge pads of paper and portfolios filled with drawings, boxes of paints and charcoals, and screenprinting screens stacked against the walls) only made my desire for simplicity and space even greater. I hate clutter and my room was one big clusterfuck, with piles everywhere, a state driven solely out of necessity.

So when my friend asked me to catsit (this was actually the third time doing it), I decided to make it a vacation. I brought with me tons of art supplies, thinking I would delve into a creative state and draw and write my heart out. But instead I did nothing…. well perhaps I should define my sense of nothing. Nothing means I did produce anything, I slept loads, I watched lots of movies, I ate at the nearby Whole Foods every single night, and I would go for strolls in the new neighborhood. Previously when catsitting, I was always overwhelmed with work, barely able to spend much of my freetime enjoying the house, the backyard, and the hood (but I always made time for the cats, I mean, how can you not want to cuddle with four cute cats).

One day I was especially lazy and slept until noon, and then just milled around the house until 4pm. (For those that don’t know me, this is kind of behavior is unheard of for me.) Feeling that I should do something, I finally changed out of my pajamas, walked three blocks to the Whole Foods, and picked up my dinner for the night.

As I headed to Whole Foods the sun was so warm and soothing, with barely a hint of wind blowing– an anomaly in San Francisco– that I decided to just keep walking, with no plan plan in mind.

I walked up the steep hills of Potrero and wandered along the crest, chasing the radiating sun. Like a lizard in need of basking in the sun, I found a spot on the curb and decided to just sit in the warming bliss.

Sitting on the high hills away from my cramped room and the hustle and bustle of the burgeoning Divisadero corridor– the next Valencia Street and home to my unusual living situation– I felt calm for the first time since living in San Francisco.

I watched the occasional family stroll by and people walk home from work, not in a rushed frantic state like so many other city slickers I observe (including myself). Rather, people were relaxed with seemingly no where to go but home.

There was not a scent of urine or feces on the street. In fact the streets looked clean enough for me to want to take a seat on the curb– something I usually don’t dare to do in San Francisco. 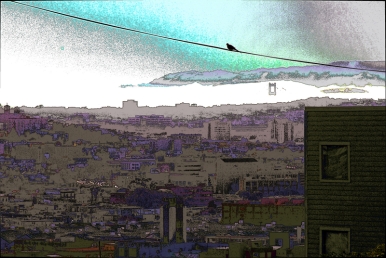 I was far enough from the ocean, but could still see Golden Gate Bridge, that I could sit in peace outside without the sharp wind blowing me back indoors.

The chaos of the city was swallowed up by the valleys below– the Mission and SoMa– and the hills seemed to repel the constant pitter patter and chatter of pedestrians.

I was convinced that I had found a hidden corner of paradise amidst the clamoring energy of San Francisco, that is until a drug-induced traveler/bum type popped out of nowhere, stumbled up to me and tossed his baseball cap at me like a frisbee, saying, “Here’s a hat.” Without the slightest pause in his cadence, he continued on his way, quickly disappearing down into the depths of the chaos.

While I did not keep the hat– it reeked of a body that hadn’t been washed for days, if not weeks, however it was in very good shape– I appreciated the random gift.

This city makes me smile every day. 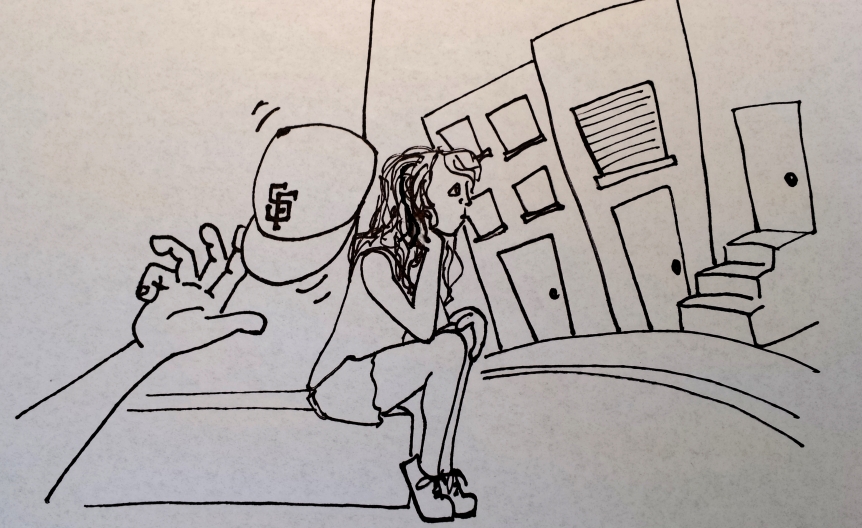